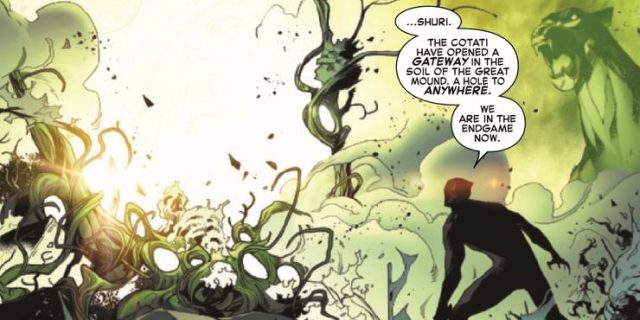 Marvel Cinematic Studios has given us 12 years and 23 fantastic movies that thrilled us inside-out. All of them were remarkable and left their impression in our heads for a very long time. And, if we are talking about MCU then how can we forget to mention about some iconic lines that are their gift to us. Through all its films, MCU has given us many iconic lines that are going to trend forever. The current Avengers and Fantastic Four crossover event Empyre has already recreated some moments from the MCU, a comic book Avengers just borrowed one of Avengers: Infinity War’s most famous phrases.

In Empyre #5, we see the Avengers and the Fantastic Four, in a crucial stage of their conflict with the plant-like alien monsters; that is just determined to finish off all the non-plant life by invading or capturing Earth and spreading the heroes’ forces. At the same, we also witness the Kree/Skull alliance that complicates the matters; with the threat of the Pyre, that is a contingency that could ignite the sun; and destroy the Earth in order to stop the Cotati from spreading.

While all these events are taking place in their ways, the Black Panther defends the fort in Wakanda by holding the vibranium mound from the Cotati. But, his efforts were not enough, and somehow the Cotati break through the mound and enters inside. At that moment, King T’Challa says the iconic dialogue that is from the Infinity War; he quotes, “We are in the endgame now.”

All the efforts from T’Challa fail, and the Cotati manages to enter inside; by forming a gateway through the powerful mound, and through that gateway Quoi, the Celestial Messiah emerges. After witnessing all these fearful events, T’Challa gives the final warning to his daughter Shuri. T’Challa gets stabbed by the Cotati swordsman after this Quoi plants the death blossom, which needs 10 minutes for the activation.

At the same time, the Kree/Skull alliance initiates the Pyre, with only nine minutes to activation. Two disasters are going to take place at the same time, and that will destroy the Earth completely. On the other side, Tony Stark and Reed Richards find it really hard to find a solution to prevent these disasters with the new Iron Man’s armor; and the time limit is limiting everything i.e., they have only nine minutes to take any action.

We can take a quick flashback and remember that in the Infinity War when Doctor Strange spoke the infamous phrase, the situations were similar as they are here. Thanos had the Time Stone, which was the fifth stone of the Infinity Gems, and after that defeat was all assured for everyone. One thing is common in both the series, and that is the absence of hope in our superheroes.

In both the scenarios, Doctor Strange and T’Challa were in a situation where there was no hope, and they depended on others to make things alright. In the Infinity War, Strange knew that Iron Man is the hero who will lead the team to victory against Thanos. And, in Empyre Iron Man and Reed Richards were the only ones who could have saved the Earth from devastation.