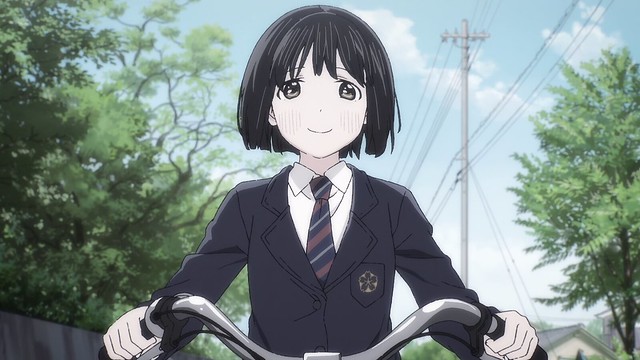 It was pointed out that the two-seater scene of a moped car depicted in the anime ” Super Cub “was “a violation.” It is also a work in which the turnip maker Honda cooperates and collaborates with the police. Actually, this scene is also in the original novel, and it is explained that it is originally prohibited. Still, what is the intention of leaving the description of “two-seater” in the animation? KADOKAWA who makes it answered. Wasn’t it a two-seater one year after getting a motorcycle license? The anime is a light novel media mix of the same name. Set in Hokuto City, Yamanashi Prefecture, it carefully depicts high school girls who purchased used Super Cub. By the way, the relevant scene is included in episode 6 (broadcast at midnight on May 12). This is a scene in which the main character, a high school student “Oguma”, runs with his classmate “Reiko” behind his Super Cub. At the beginning of episode 6, it was introduced that Oguma had obtained a motorcycle license, and it was mentioned that the displacement of the Super Cub was changed from 49cc to 52cc, and the moped was changed to two types. After that, the above-mentioned two-seater scene is drawn. In addition, some viewers of the work pointed out illegal acts, such as “It is a violation to ride a two-seater in less than a year after getting a motorcycle license.”

Road Traffic LawThen, it is stipulated that a person who has been licensed for a normal motorcycle for less than one year must not drive a normal motorcycle with a person other than the driver on board, and if this is violated, it will be 100,000 yen or less. Be fined. However, the license plates of the turnips that appear use “shi” and “n” that is not seen in reality, and it is clearly stated that the work is fiction. On the other hand, in the work, mentions in accordance with actual traffic regulations such as “The maximum speed, which was limited to 30 km regardless of the road, is now the same as other cars” are conspicuous in various places. He also collaborated with the Yamanashi Prefectural Police Hokuto Station, which was the stage of his work, to make posters for crime prevention and traffic safety awareness. When asked about this two-seater depiction, KADOKAWA, the creator of the anime, answered.KADOKAWA “Enjoy as a fun story with dreams” “This story is fiction. The characters, groups, names, etc. that appear are fictitious and have nothing to do with the real thing. However, the” Super “that appears in this story “Cub” is Honda Giken Kogyo Co., Ltd.We reproduce and use the actual design with the cooperation and supervision of. As clearly stated at the top in this volume, this story is fiction and is used only with the cooperation and supervision of Honda Motor Co., Ltd. regarding the “Super Cub” design. This two-seater was also politely talked about in the original novel, and although it was expressed in abbreviated form in the animation, it is also a key scene in the subsequent development, and that point is I respected the original story and the flow of the story. There is no intention to violate public order and morals or the law, as it will be directed after it is judged necessary for the development of the story that emphasizes character. We hope that you will enjoy it as a fun story fiction with a dream that is not a reality that was created to the last.”Important story” that the work tells me I also tried to hit the novel that was the original of the animation. In order to avoid further spoilers, I will not write in detail, but it is true that the hero’s feelings were carefully written about “two-seater less than one year after obtaining a motorcycle license”. Oguma and Reiko ride two people on the road by the sea where they are going on a school trip. As a viewer, I’m almost dazzled by the youth that never returns. By all means, please touch the animation and the original to see how it came to be a two-seater.