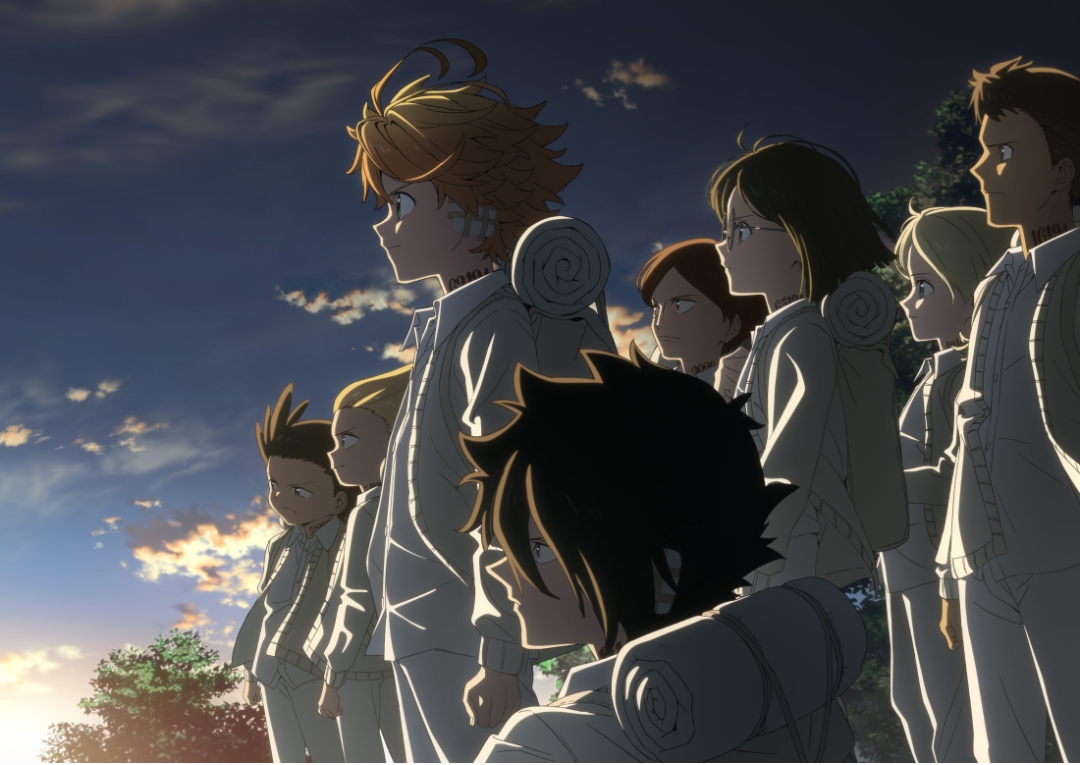 With a brand new key visual, The Promised Neverland confirmed yet again that the next season is on the way. Initially scheduled to air from October 2020, the season got pushed to 2021 due to the ongoing Coronavirus pandemic, which is the sole reason for most of the projects of the industry to have put on halt or for getting delayed indefinitely. The production of the second season began last year, however keeping in mind the health and safety of the crew, the series got rescheduled and now will be airing in January 2021. Season one will be rebroadcasted in October 2020, in Japan for us to recollect the plot of the old episodes, and right after it completes all the episodes, the broadcast of season 2 will begin. Here are the visuals for season 2 released a few days back. You can check it out now.

The first season of The Promised Neverland started airing from January 11, 2019, on Fuji TV’s late-night Noitamina anime programming block, and concluded on March 29, 2019, with a total of twelve episodes. If you want to watch season 1 online, you can switch to any of the streaming platforms mentioned here. However, it varies around the world, for example, in the US, you can stream the series on Crunchyroll, FunimationNow, Hulu, and Hidive, but in Japan, it is available to stream on Amazon, on Wakanim in French, and on AnimeLab in New Zealand and Australia.

The series, set in 2045, depicting the story of an eleven year-old orphan, Emma, residing in Grace Field House, which is a small orphanage taking care of her and all of her 37 siblings. They had been living a great life there, with good food and shelter, under the care of caretaker Isabella, whom they thought of as their own mother, but had only one obligation, not to venture out of the gate that will let them into the outside world. However, their lives took a dramatic turn when Emma and her friend, Norman, discovered that the supposed orphanage was nothing but a farm to raise humans as food for a demon, and Isabella was also in allegiance with the demonic creatures. They determined to break out of the orphanage and set up a mission to save all of their other siblings.

The world has already opened up for Emma along with her other siblings, as the finale of ‘The Promised Neverland’ season 1 showcased their successful escape from Grace Field House. In the upcoming season, we are probably going to see how they will be able to escape from the woods and how they will explore the new world, which will be entirely different from their old one. The series is a CloverWorks anime adaptation of the manga series bearing the same name. The first season adapted chapter 1 to 37 of the manga, containing the Introduction and Jailbreak Arc while in season 2, Promised Forest Arc, the Search For Minerva Arc, and also the Goldy Pond Battle Arc would be adapted.

The Promised Neverland Season 2 Casts Emma, voiced over by Sumire Morohoshi, Norman, voiced over by Maaya Uchida, and Ray by Mariya Ise, in lead roles. Other notable characters in the anime were played by Conny by Ari Ozawa, Don by Shinei Ueki, Thoma by Mari Hino, Nat by Shizuka Ishigami, Gilda by Lynn, Anna by Ai Kayano, Phil by Hiyori Kono and Lani by Yuuko Mori. The major antagonists of the anime include Isabella voiced over by Yūko Kaida, Krone by Nao Fujita, and Sarah/Grandmother by Mami Koyama. All the names mentioned here are expected to come up in the list of voice artists for the second season.