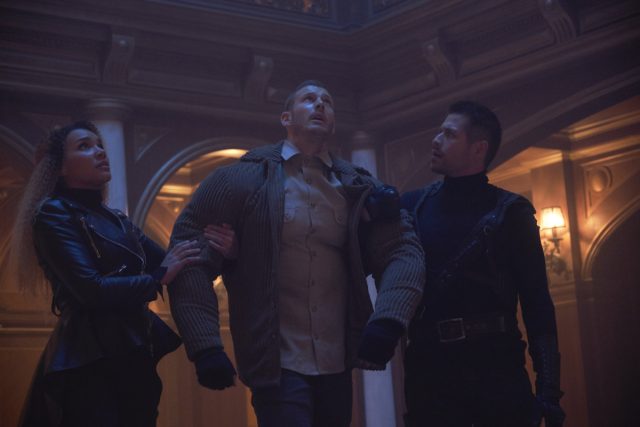 Umbrella Academy Season 2 was a lot different from the original comic book. Like many other Netflix’s books to TV adaptations, this too is far away from its original source, which is obviously a good thing for the plotline of the show.  As we all know, the first part of the Umbrella Academy was based on volume one of Gerard Way and Gabriel Ba’s comic book series called “Umbrella Academy: Apocalypse Suite”. The second season took its inspiration from the second volume of the comic series named Umbrella Academy: Dallas.

We are here to let you know about the major differences between the comic and the show. Well, let’s take a dive in.

We saw Luther in Dallas becoming a recluse after they defeated Vanya. He eventually partnered with older Five, and they go after Kid Five, but this part is very differently shown in the series. He ends up lost in the 60s and becomes a bodyguard for a mob boss, and as they get thrown into the timestream by Five, we see him still longing for Allison, who is married. When he meets her husband, he goes through a jealousy phase, simultaneously trying to keep himself with Vanya. In the series, Luther is shown as a bridge connecting the family back while in the comic, he is shown as the one who leaves them to disband.

In Dallas, we saw Allison coping with her personal problems; when she gets separated from her husband and kid, while she is also trying to rehab Vanya. She can’t speak as Vanya cut her throat, but eventually, she partners with Five, and they go through the time to kill JFK. Her voice was restored through surgery. But, interestingly, none of this incident took place in the series.

We saw Allison becoming a Civil Right Activist while marrying Raymond. She didn’t tell him about her secret of being from the future, and she goes to join her family while they are on the way to kill JFK. Talking about her lost voice, so it automatically comes back, and she gets one more chance to make back up with Vanya.

In Dallas, Five trained the Time Commission’s other agents and Allison to ensure JFK murder; in order to protect his mother. Older Five turned on the Commission, so Kid Five and Co. have to stop him ensure their plant kills the president. Allison pretends to be his wife and blows his brain out.

While in the show, we saw that Kid Five wants to stop Older Five as he is obsessed with killing JFK. He is sent to 2019 by Luther and Kid Five.

In comic Dallas, we see Diego not doing much. He only does his vigilante work before tripping through time with Luther and Klaus in order to stop Kid Five. Well, that doesn’t happen in the show. He joins the Commission and falls in love with Lila, who is the daughter of Handler. We see the show giving more depth to Diego’s character, and he also becomes a caretaker to the family as he wants to help redeem Lila