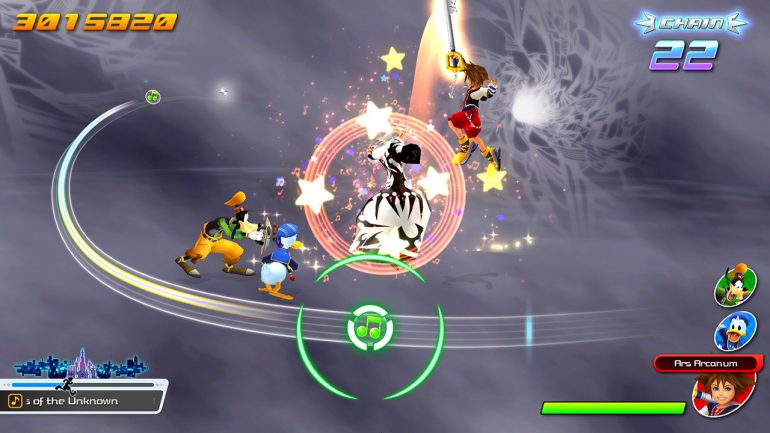 Initially scheduled to be released in October this year, the upcoming rhythm action game is in a fit state to be released on November 11, 2020, in Japan and on November 13, 2020, globally. It will be made available for the platforms, including Xbox One, PlayStation 4, and Nintendo Switch. Set after the Re Mind downloadable content framework of Kingdom Hearts III, Melody of Memory is going to be the fourteenth installment in the overall franchise of Kingdom Hearts.

The creator of the series, Tetsuya Nomura, had hinted at the game’s existence earlier this year in January 2020, and by June, the confirmation was also given. The game’s release was delayed due to the Coronavirus pandemic, which impacted the voice actor’s recordings. Developed by Square Enix Creative Business Unit I and indieszero Corp., the game has been produced by Ichirou Hazama, with Tetsuya Nomura and Masanobu Suzui serving as the directors.

The game is going to have more than 20 characters from the series, which are playable, with four major party groupings. The first group, which is the ‘Classic’ Party, includes Donald Duck, Sora, and Goofy; while the second group known as the ‘Days’ party, will have Axel, Roxas, and Xion under it; the third group which is the ‘DDD’ party includes Riku with two Dream Eaters; while Aqua, Terra, and Ventus will be a part of the fourth group titled the ‘BBS’ party. King Mickey will be serving as a fourth party member for assisting, responsible for healing, and adding rhythm points when the ‘King’s Call’ item is activated. Other playable characters from Disney include Aladdin, Mulan, Beast, Peter Pan, Hercules, Ariel, Simba, and Stitch. Pixar and Disney’s characters will be included in the guest members’ list in their particular themed worlds, putting forward symbols and sounds into the gameplay.

The upcoming game does not feature any new tracks; instead, it consists of all the pre-existing tracks, which are over 140, from the franchise and the Disney worlds. However, the game does feature new title and end credit tracks from the composer of the series, Yoko Shimomura.

The game features the Beginner Standard of the series, and Proud difficulties, with each stage having three play options— the first of which is Basic. The second option is One Button, which can eliminate button complexity and lets the party members auto-attack; the last option is the Performer, which puts on extra opponents and button sequences. Each stage consists of different tasks to complete, which grant materials to unseal new items and songs. When each level is cleared, the cinematic scene player and new music gets unlocked.

Illustrated by series director Tetsuya Nomura, we're proud to present the brand-new key art for #KingdomHearts Melody of Memory, coming to #NintendoSwitch, #PS4 and #Xbox One on November 13, 2020!

How many of the scenes behind Kairi do you recognize?

The most important single-player mode is titled ‘World Tour,’ which is basically the ‘story campaign’ of Melody of Memory. The multiplayer modes of the game feature— Double Play co-op mode, which allows the players to compete locally, playing as Sora and Riku together, in order to grab the highest collective score; COM versus, which lets the players play against the computer bots to win with high ranks, received three out of five times; and Versus mode, where the competitor will battle online against each other, or against local multiplayer (which is supported only by Nintendo Switch), to get higher rank in a best two out of three.