Antlers coming to theatres in 2021, All Updates 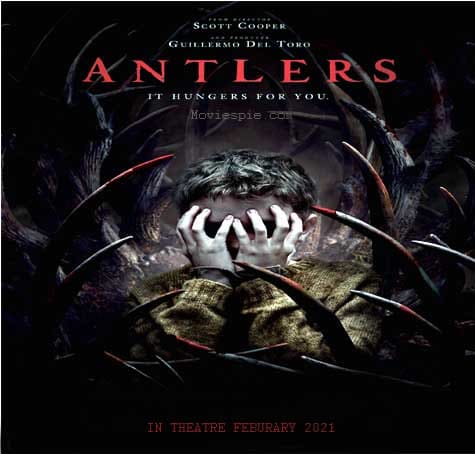 The film is being produced by Guillermo Del Toro, David S. Goyer, and J. Miles Dale. Florian Hoffmeister has done the cinematography. The film production has taken place under Phantom Four and Double Dare You Productions, production companies. The film will have a running time of ninety-nine minutes while Searchlight Pictures are distributing it. The music for the film has been given by Javier Navarrete.

The release of the film, Antlers

The production of the film Antlers was announced back in 2018. In July, it was announced that Guillermo del Toro would be producing the film along with the director of the film, Scott Cooper. Keri Russell was in talks to be cast as the main lead for the film.

The filming sites were chosen to be in Vancouver, British Columbia, and Canada. In August, more actors like Jesse Plemons were added to the cast members. Jeremy T. Thomas, Graham Greene, Amy Madigan, Scott Haze, and Rory Cochrane also joined the star cast a couple of months later in October.

The principal photography for Antlers began on 1st October 2018 and was wrapped up by 30th November 2018.

The film was set for a release in this year itself on 17th April 2020. Unfortunately, due to the coronavirus pandemic, the release of the film is now set for a February release. The official date for the release of Antlers is set on 12th February 2021.

The cast of the film, Antlers

The plot of the film, Antlers

Julia Meadows, played by Keri Russell, is a high school teacher, and her brother, Paul is the local Sheriff in the small city of Oregon. Eventually, Julia Meadows becomes concerned about one of her students named Lucas Weaver, who has been keeping a supernatural creature in his house.

Is there an official trailer for Antlers?

Yes, an official trailer was released on 23rd October 2020 by the makers. The audience can watch the available trailer to get a short glimpse into the supernatural horror story.