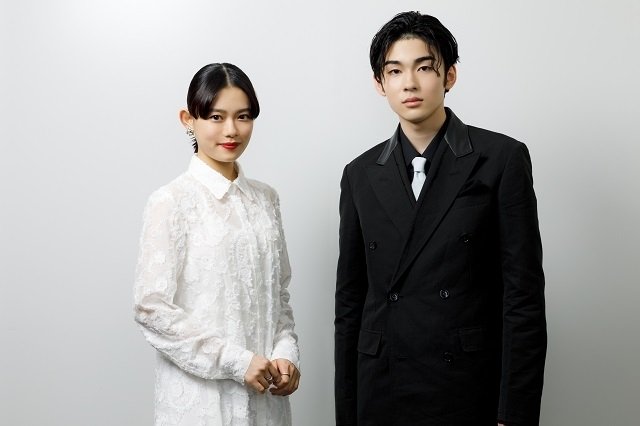 * This interview was conducted in March 2020, before the postponement of publication was announced due to the spread of the new coronavirus infection.

Pinch words as if playing music, express them in words. In that way, Kabuki world’s rising star Ichikawa Somegoro and young talented actress Sugisaki Hana are animated movie ” Words spring up like a cider ” Served as a voice actor. Ichikawa and Sugisaki play “Cherry,” a haiku boy who is not good at communicating, and “Smile,” a masked girl who hides the complex. It is a refreshing youth movie that depicts the events of two people who met in a particular accident in a local city. (Interview/text / Rie Shintani, Photo / Yuki Maniwa )

It was Somegoro Ichikawa who played the voice of a 17-year-old haiku boy. For Koshiro Matsumoto, the 10th generation, and Shirokane Matsumoto, the 2nd generation, for his father, and Somegoro, who lives in a world of Kabuki, the encounter with a young man named Cherry was “fresh.” At the age of 14, he experienced the first movie, the first voice actor, the first starring, and three firsts.

“I haven’t had a youth-like youth (because I’ve been on the Kabuki stage since I was a child), and I don’t think I’ll ever have one, so (unfortunately) I sympathize with my youth and cherry youth. Wasn’t there ”

However, I was able to enjoy it because it was different.

“For example, the Kabuki script only contains the lines and information about where and who goes out, while the movie script explicitly describes how the character feels at that time. It was very fresh. ”

Sugisaki became the challenge of the voice actor following “When Marnie Was There ” and ” Mary and the Witch’s Flower. ” It is a bright and positive heroine, Smile, who has a complex but plays.

“I realized once again that it is difficult to convey with just voice, even in terms of technology, where you would usually be asked for an agent that you wouldn’t usually make in your life. But this time, many co-stars, including Mr. Ichikawa. It was very fresh and fun to have the experience of recording with Mina-san. ”

Director Ishiguro Kyohei’s commitment that “interacting with each other naturally leads to quality improvement” rather than dubbing by each performer alone is taking the method of recording together. Both Somegoro and Sugisaki were selected because the director fell in love with them, but Somegoro revealed that he didn’t like his voice.

“I don’t like my voice, so it was painful to hear the recorded voice, but the director chose it as Cherry’s voice, so instead of creating a character, the director said,” Cherry’s I played with my voice, who said, “It’s a voice.”

Sugisaki also said, “I didn’t feel like creating a role.”

“What kind of girl is Smile? When I first saw the character’s illustration, I felt that she was a girl with strong eyesight and dignity. When I saw Smile in the video, my body naturally gave me a voice. I felt like it was coming out. ”

The director who listened to Sugisaki’s radio imagined that “Smile would laugh like this,” and Sugisaki said, “I got a hint from the director’s words, and Smile’s laughter feels close to my own. It has become. ”

Cherry is not good at talking to people and cannot speak well when nervous, and Smile always wears a mask in public to hide her prominent front teeth during orthodontics. What makes this movie so appealing is that it depicts a complex that everyone can sympathize with in a boy-meets-girl-like youth movie. I sympathize with how they face their complex and how they grow up, and I am impressed.

Somegoro himself said, “It can be said not only for cherries but also for smiles, but it also realistically reflects modern teens (although there are universal conflicts),” he said, adding himself to the character’s feelings. There were.

Haiku and records are items that are of interest to both teens and adults today. In the first place, the phrases that appear in the play, including the words ” Words bubbling up like a cider, ” which is also the title, were devised by active high school students of the same generation as Cherry. Also, behind the fact that cherry’s hobby is haiku, it is an essential element that expresses cherry, inspired by the theory that the ancestor of Japanese rap may be haiku.

“I also like reading haiku and poetry and expressing them using” words, ” says Sugisaki, who talks about the culture depicted in the film.

“I’m not familiar with haiku and music culture, but I get the impression that what was once new will soon become nostalgic, and the old one will go around and be received as a new one. I’m interested in the records that appear in the play. ”

Haiku is familiar to Somegoro, saying, “My grandfather often sings,” but I had never experienced a record. “I’ve never heard a form, and I was interested in having the director show me what I used as a reference for the record in this movie, and not only listening to it but also decorating it and collecting it. I wanted to listen to the record myself. ”

” Words Bubbling Up Like a Cider, “which depicts the youth of a summer experienced by the 17-year-old hero, is a movie that resonates not only with teens but also with adults, and is a movie with nostalgia and modernity. ..